A Car...and a some new car vocabulary! 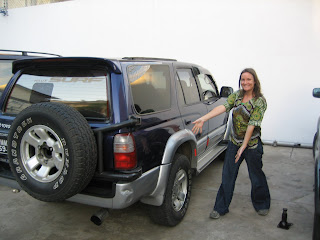 God has provided a wonderful car for me to use! I've been driving around Maputo getting various papers signed, stamped, and notarized for my visa. It has been good for me to practice left-side driving and I even got some 4-wheel drive practice on Sunday! 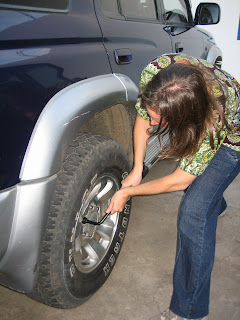 I was also able to practice changing the tires so that I would be better prepared when I go north of Maputo. It looks like I may be able to take a prayer/survey trip to the north in October. I'm praying for God's guidance as to the specific place I am to live and serve.


It has been such a blessing to speak Portuguese and begin to build relationships here in Maputo. The man on the far left is Bizarco, and he's from an area north of Maputo. We had a long conversation about life, family, traditions, church and God. It was so good to hear his point of view and his story, and also share my story. I thank God for the opportunities to listen, learn, and grow.


Luis, standing next to me, helped me to change the tires on my car and taught me how to use certain tools. One of the more confusing moments for me was when he asked, "Onde esta o macaco?" (Where is the monkey?)

And he began searching under all the seats and in all the various compartments. I began to look for "the monkey" as well, though I had no idea what I was really looking for.

Finally I had to ask, "What is a monkey? The only monkey I know about is an animal," and I preceded to scratch under my arms and make the appropriate noises. To which he responded with his own motions - motions that were far more dignified than mine and which illustrated a pumping action...it was a jack! So through some sweat, grease, and acting like a monkey, my Portuguese vocabulary has grown to include some new car words!
Posted by Aimee Howarth at 28.7.09