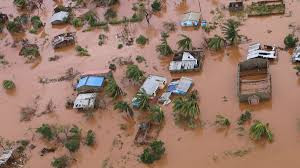 From my colleagues in Mozambique:

Cylone Idai hit Beira during the night of 14th to 15th March bringing widespread devastation to the city and wider region.  Reports indicate that about 90% of the buildings and infrastructure has been adversely affected in Beira, the second largest city in Mozambique.  While the cyclone ravaged all in its path and left most of the region under water, the sheer amounts of rainfall further inland as far as Zimbabwe has compounded the situation.  This natural disaster has led to a huge humanitarian crisis with a raising death toll by the day.

We appeal for prayer for the estimated 1.7 million Mozambicans that have been directly affected.  Pray also for those also affected in Zimbabwe and Malawi.

One Mission ministries and missionaries are based further south in Maputo (1000km) and have not been affected by the cyclone.  In terms of those directly related to us, members of a church in Mopeia, Zambezia province lost their homes, belongings and crops.  We are preparing to respond in solidarity with those affected.  We intend to join forces with mission partners in the region to offer relief and support for the rebuilding of peoples lives in the worst affected areas.  All donations to OMS Mozambique Disaster Relief # 402600 are greatly appreciated. Pray that doors would open for the gospel to be shared in Word and deed by Christians locally and globally. Colossians 4 v 3.

If you would like to help, you can use this link:

https://onemissionsociety.org/give/express-give
ill in:
Amount you would like to give
Frequency is a "special gift"
Missionary/Project is "Mozambique Disaster Relief # 402600."