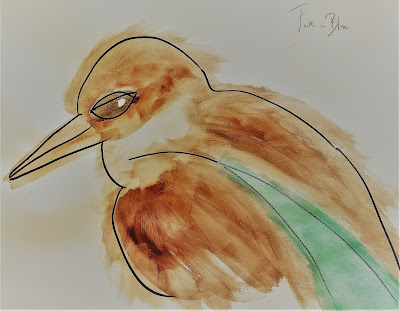 When I was in Mozambique earlier this year, I saw a little brown and white bird take off from a tree. But when it flew in front of me, I saw a beautiful blue!

The bird landed on a branch up ahead of me, and when I came closer, I saw that it was just a brownish grey bird perched on the branch. It was so strange that I wondered if I had imagined that I had seen blue.

I wanted to see it fly again to understand what had happened, so I would need to disturb its rest to make it fly.

I approached the bird, and its head cocked a little to the side, but it stayed put. I took a step closer. This time it's head turned to look at me, registering it's annoyance at my presence.  But it still stayed perched. I took one more step hoping to disturb it enough, and it finally took off.

Then I saw the most shockingly beautiful blue bird in flight.

It's back and tail were turquoise aqua shining blue. But when it was resting, it's brownish grey feathers had covered it's back like a closed curtain. 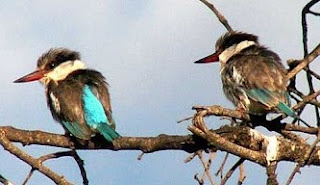 As I stood there thinking about the hidden beauty of the little bird, I thought about faith.

But faith in flight reveals such a beautiful blue.

"In this you rejoice, though now for a little while, if necessary, you have been grieved by various trials, so that the tested genuineness of your faith - more precious than gold that perishes though it is tested by fire- may be found to result in praise and glory and honor at the revelation of Jesus Christ."