I traveled to Inhambane this last week to work on the first construction project for the house where I will live! 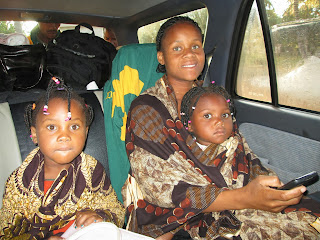 A lovely family from the Palavra Viva church in Intaka (Maputo) came with me. (above - Mama Alda with daughters, Olginha and Crisney) 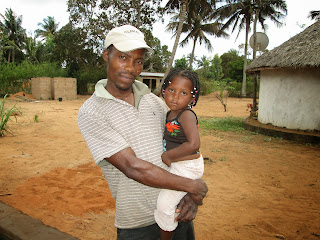 Dad, Juliao, is a worker in the church, and is also a ministry course student.

He has experience in construction and has been looking for work, so he did the first project in Inhambane...a water tank! 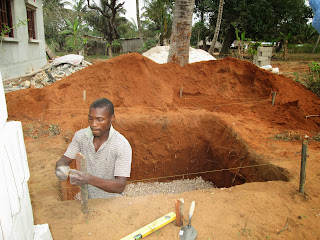 Juliao started to work on the tank and sent me off to buy materials and tools...

...my knowledge of Portuguese vocabulary in construction materials and tools is weak at best.

When Juliao said he would need a colher (spoon in Portuguese), I wondered what he would need a spoon for? I found out there's a construction meaning of colher, which made much more sense...a spade.

I searched the village for tools such as a "kucha-kucha" not knowing what it was, and when I found it, not knowing whether it would be the size of peanut or a lawnmower. (It turns out it is a medium sized tool used to smooth out cement) 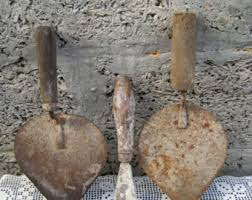 By the second day, I found myself negotiating for rocks because I learned that the sellers beat in the 20 liter cans used for measuring so that they hold fewer rocks.

After shaking my head and saying that the can had clearly been beaten in and did not hold 20 liters worth, I was happy to get a basela - a word in the Changana and Txitxopi languages for an extra amount on top of what one pays for - in this case a whole extra can of rocks! 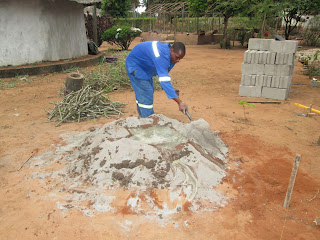 Rufino, (mixing cement), is from Papa Tomas' church in Cala, and also came to work with us. 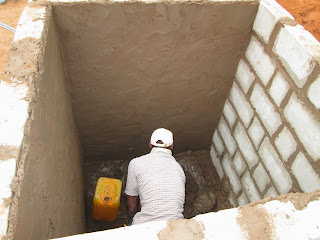 When Juliao had almost finished with the cement walls of the water tank, he said he would need a batemassa.

Seeing the blank look on my face, he said Rufino should come along to help find the mysterious tool. So we set off for the village.

After 20 minutes, 3 stops, and no batemassa, we met a man who said he might know where we could borrow one.
Off we went together with our new friend, 2 more stops and 30 minutes later we arrived at a small house with a family sitting outside on their mat.

Traditional greetings were exchanged, health and family was asked about, and then came the big question, "Can we borrow your batemassa?"

The answer was yes, and smiles all around, then out of the house came the illusive instrument...a stick stuck in a can filled with hardened concrete used for beating down the foundation of something...like a water tank.

I always have much to learn. 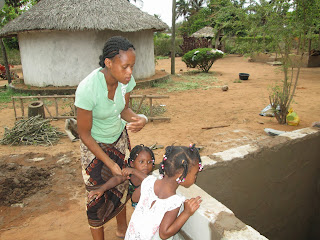 Alda and the girls came to see what their Dad was up to. 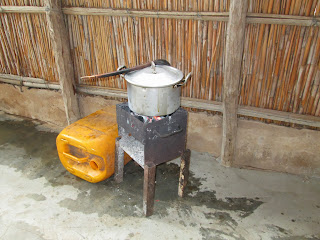 Alda had been cooking the meals back at the house where we stayed.

It was a blessing to do a Bible study with Alda about Eunice, and what the Bible teaches about being a godly mother. 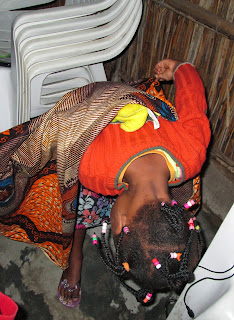 Alda's daughter, Olginha, was practicing her mothering skills by tying her yellow stuffed elephant onto her back as Mozambican women do with their babies. 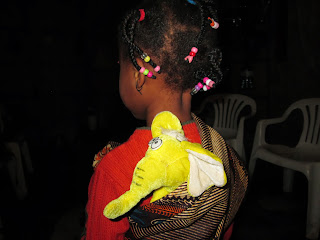 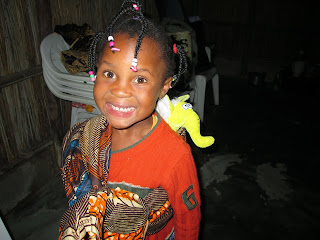 When we began to fill the water tank on the final day of this first project, I was reminded of God's promise to me in 2009 when He specifically called me to serve Him in Inhambane. 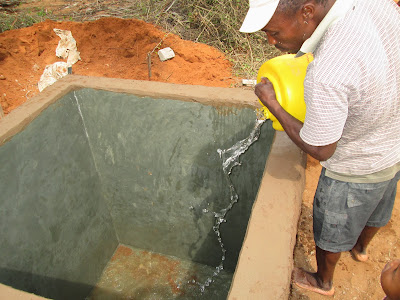 "When the poor and needy seek water,
and there is none,
and their tongue is parched with thirst,
I the Lord will answer them;


I the God of Israel will not forsake them.


I will open rivers on the bare heights,
and fountains in the midst of the valleys.


I will make the wilderness a pool of water,
and the dry land springs of water."
Isaiah 41:17-18
God wants to bring Jesus Christ, like water, to those who are parched with thirst. This is my ultimate desire.
I praise God for this promise and this start.
Posted by Aimee Howarth at 16.10.13