We were joined by the director of the Maputo Biblical and Theological seminary, teachers from CAM school, and special visitors from the U.S. and South Africa. It was good to come aside to rest, reflect, and relate. 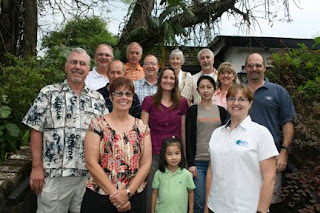 "Come to me all you who labor and are heavy laden, and I will give you rest. Take My yoke upon you and learn from Me, for I am gentle and lowly in heart, and you will find rest for your souls. For My yoke is easy and My burden is light."
Matthew 11:28-30

And on a slightly different note...

It was late Tuesday night and I had just gotten back to my apartment after being out at an evening Bible study in Kongoloti. As I got ready for bed, my peripheral vision picked up a shadowy movement in the hallway, accompanied by an irregular flapping sound. The first thing that came to my mind was a bird...

With the image of a delicate little finch in my head, I walked to the hallway and let out a bloodcurdling scream when I was met with a large dark creature flying at my face. Unlike a fluttering bird, it was a kind of sloppy ominous flying...like a bat.

I just barely ducked under it, and then it flapped into my room, where sadly there was no open window by which it could escape. The first thing I thought of was to grab my electric tennis racket, which can be used for 'zapping' mosquitoes. However, I feared that 'zapping' the bat would be like shooting a grizzly bear with a pellet gun - it would probably only anger it.

Then I thought of capturing it in a box...but I wasn't able to muster up the courage to do it. So with the electric tennis racket still in my hand and a crazed look in my eye, I walked outside in search of help. There I found a very apprehensive looking Mozambican guard, who had just heard my horrific scream.

Not knowing the Portuguese word for bat, I said, "There's something in my apartment that's like a bird, but it's not a bird. Can you help me catch it?" After some convincing, he bravely accepted the challenge to capture the strange creature.

As we approached my room, I saw that it was gruesomely clinging on to the mosquito net over my bed! The guard and I stood there stalling as we nervously talked about its features..."what a furry coat" "and a worm-like tail" "and look at its strange little feet" etc... And then the guard, after taking a moment to gather his courage, bravely knocked it into the box and quickly placed the lid on top.

With the bat now safely in the box, we decided to take it out to the street and gently toss it near the stump of a tree. The bat landed with an unceremonious plop...and then quick as lightning, it took flight and flew off toward the moon like the end of a Halloween movie.

But before we let it go, I asked the guard if he could quickly open the box so I could take a picture. Here's the bat...morcego in Portuguese! 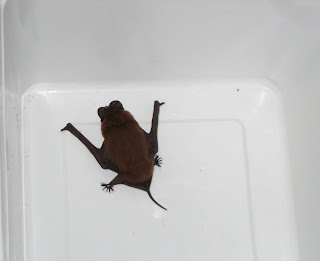