Tribute to the "Batmen"

This week I'll be moving to a place called Matola, which is about 30 minutes away from where I am now. Since I'm leaving the apartment where I've lived this past year, I'd like to give tribute to some special guards that have helped me immensely. I'll call them the...Batmen.

Adelino, Rogerio, Horacio, and Nataniel
(You may notice that they all look like Malibu locals! I asked my Dad if he could send some shirts to say thank you to them :)

After the first two bats, I didn't want this to become some sort of "bat blog", so I didn't write the stories of bat #3, who nestled under the pillow on my bed and then squealed like a little pig when the guard grabbed him (below). After bats #1 and #2, this guard suggested we start killing these bats instead of letting them go outside. So he "cremated" bat #3. 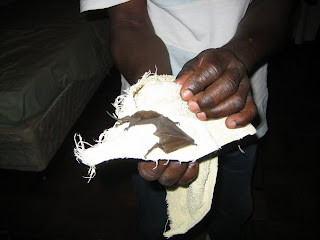 I also never wrote about bat #4, and how he chased me down the hallway, possibly using his "echolocation"skills to hunt me down...I was screaming all the way.

When I got to a room, I quickly slammed the door behind me, and then found out that he was so close, that I had actually slammed him in the door...not a pleasant sight.

I do not have a picture, which may be for the best. The guard picked up his lifeless body, put him in plastic bag and threw him in the trash (outside). 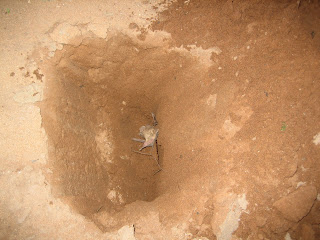 Finally, there was infamous bat #5 who flew in high circles around my dinner table and could not be reached...until that guard whacked him down with a broom.

Once he got him onto the floor, a struggle ensued, all the while I stood screaming in the corner. Thankfully, the "broomed" guard won out. He then took him outside and finished him off with a shovel...also not a pleasant sight. However, bat #5 was given a proper burial (above) right outside my front door...

I'm thankful to these four brave Batmen!
Posted by Aimee Howarth at 3.8.10